Paximada is a promontory on the South Euboia. At this point the seasonal summer north wind meltemi, μελτέμι, exceeds 100 km/hour. The sea becomes rough and dynamic, you feel sand and rock dust on your teeth, you can’t walk vertically, the air is full of music of spheres, finally, meltemi can just take you like a sand grain and throw into the sea. This almost happened to me once, but I grabbed the air with my terrified hands, and that was what saved me from the falling from the rock. Victim of the small stones shrapnel, I got red bruises on my legs… What an adventure! 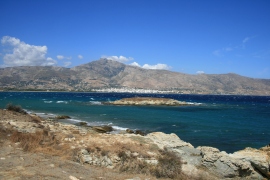 We took two ferry tickets to Rethymnon just before the departure from Piraeus and spent the whole night on the ship, me trying to sleep in my sleeping bag, he not feeling at ease to do the same. The moment of arrival was almost mystic: that was our very first trip not only to Crete, but also to Greece and to… Europe. It was still very dark, and the dark land of the Minoans was slightly approaching, it was hard to distinguish it from the dark sea. There were only the port lights and very intense aromas, a mixture of the ground, rain, sea salt, and sophisticated odors of the Cretan winter flora. We touched the land of Ariadne, inhaling this fantastic air. Slowly, step by step, we reached the center of Rethymnon and found one open fournos, where we took two Greek coffees and two tyropitas.

At dawn, life of this small town started to move slowly. We did not have any hotel or room for rent reservation. We arrived just like this, unprepared. Me, who by this moment could already link a couple of Greek words; he, speaking funny English. We bought a local newspaper with the local accommodation announcements, studied it for a while and started to call the owners. I felt very nervous and very unsure about our success, about my newly born Greek language, but we managed to find an apartment right in the old center of Rethymnon.

The owner’s name was Chrisoula, she told us on the phone that she would pick us up (we were at the telephone box at the old port). If you’ve ever been to Rethymnon, you probably know its traditional architecture, so we rented an apartment in a traditional house for 15 euros per night. However, it was freezing cold inside, so Chrisoula proposed us to occupy also another room, the one with heating, no additional fees. So we slept in the warm one and ate and watched TV in the cold one.

Chrisoula brought us a precious present: home-made tsikoudia. And after our supper, we drank some of this hot drink and went out for a walk, into – already and again – the dark town with its narrow romantic streets… And that was the best moment… we were laughing, we felt warm, happy like two lost, a little drunk souls, anonyms in an unknown town, on the land – huge island – breathing a powerful mythical aura.

Once upon a time, I came to Sougia just for one night. That was one of the most ridiculous and funniest trips like those when you come somewhere and can’t stop laughing. Because of a kind of absurdity which is difficult to explain. Sougia, that’s roughly a few houses and a beach between the rocks, on the southern Crete. The tiny village where I came by bus from Chania in the afternoon and understood straight away upon my arrival that there was nothing to do. But that’s a nice place for doing nothing.

There were a few Greeks at the bus stop, who hoped for some tourists. I asked how much would be your room. 11 euros, one said. Ok, let’s go. It was 50 meters from the sea, in the building the first floor of which occupied the local police office.

The room of an hermit like me was very small, but I only needed a bed.

I had some time before sunset for a walk towards the ancient Lissos, not enough though to reach it and to come back. 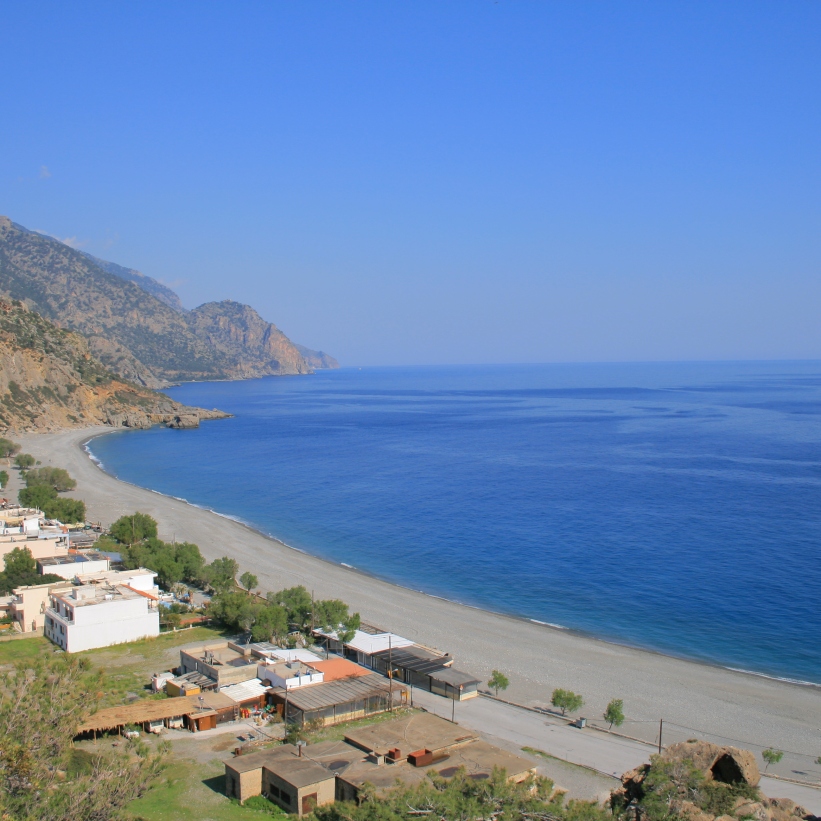 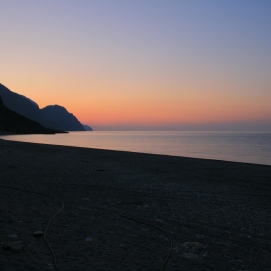 Better to come here early in the morning. The next day, I had to return with the first bus to Chania…

There was the Analog before the Digital era. And there was our Crimea before the russians’ invasion.

Here’s me in Tauris at the very beginning of the XXI century. 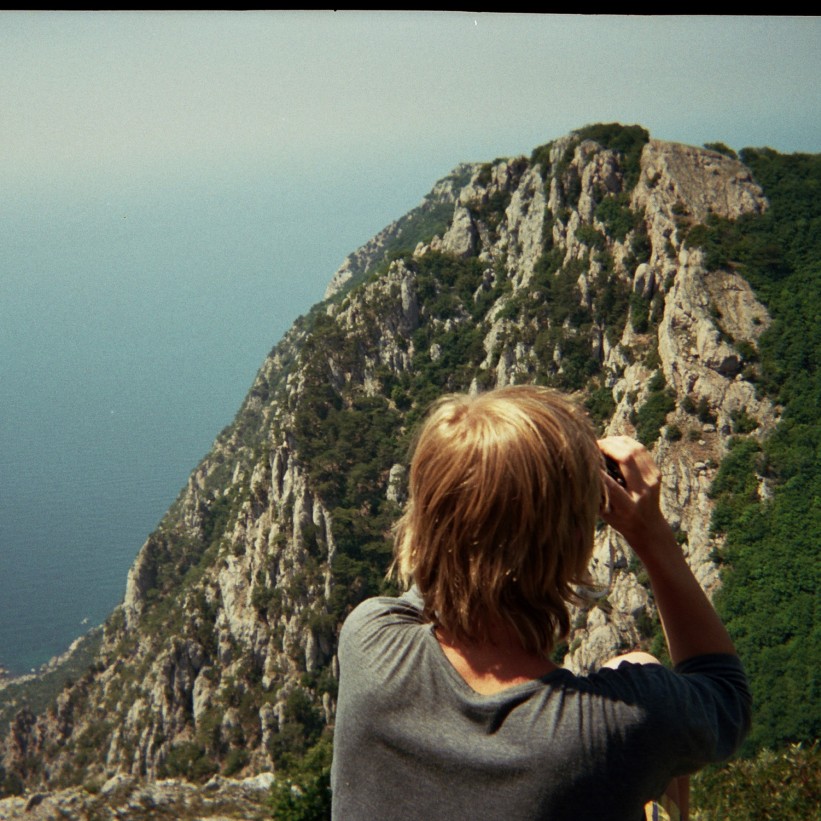 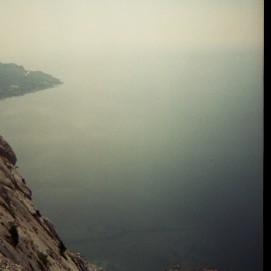 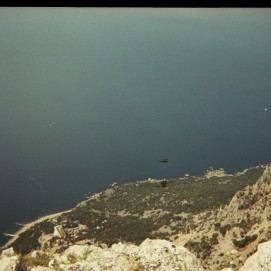 Cape Aja, a unique, sublime rocky place. And deadly, because the rocks fall from time to time and sometimes crazy people staying in tents there under the rocks die. Aja Cape is on the shores of the Pontus Euxinus. Closed territory since 2014, exactly as it was during the soviet period.

Yes, we did all this way up… We still do it sometimes, but not in the Crimea. In Greece.

Ταλαγάνι. We’ve discovered talagani from Messenia, Peloponnese. It is very good, not so salty, elastic, edible with anything you might imagine (coffee, honey, for instance). A bit expensive: more than 14 euros for 1 kg; 3.40 euros for these 2 slices, or “fetas”, as the Greeks say). We bought it in Kritikos supermarket in Karystos in 2017; the next year, unfortunately, Kritikos did not have it any more. 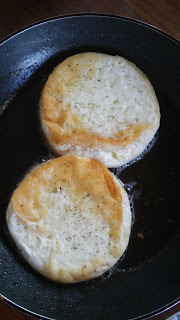 By the shores of a pretty little island that we call Yste, an island bathing in the waters of the Aegean, there were many sea turtles this summer. One just had to be a quiet swimmer or even an attentive walker.

You suddenly noticed a small head in the water, it looked like a very small human head, but while you tried to understand what was going on, the head felt that someone was watching it and disappeared… in order to appear a little further and a little bit later.

They were all different, slow and fast at the same time, curious and cautious, green or like sand, brown or nearly black. The turtle shells were incrusted with shells, forming always a new design. Followed by an escort of gray and green little fishes, the turtles were at grass, searching food in the rocks, at the bottom of the sea and on its surface.

When did you see the night sky last time ? the sky incrusted densely with the stars so that it becomes white, so that you don’t need any light?

Well, if you do not remember this moment, you have to take a boat from Kymê on Euboia which will take you to Skyros, Sporades, and after arrival head to its north-western part. You will go south next time, first enjoy the pine forest that covers the nothern half of this tiny island the port of which meets you with pompous (and funny) orchestra music. 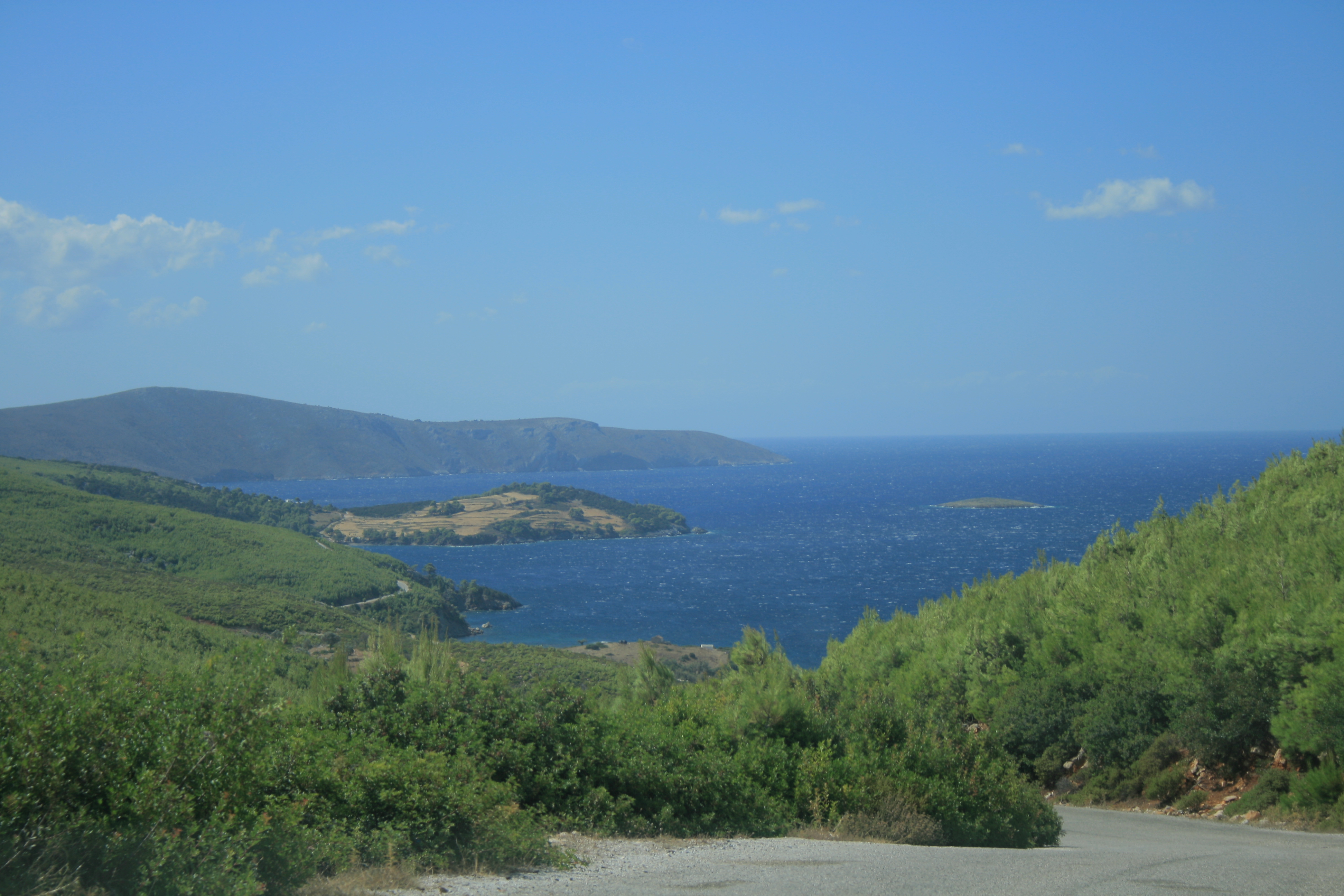 Go ahead and find a place on one of the beaches, and spend a night or two there. Listen to the sound of the wind in πεύκα, pine trees, to the waves, look deep into the sky – it is extremely generous during the night – and try not to fall asleep as long as you can.

And after all, the next morning, visit the miniature church by the sea, Κυρά Παναγιά. 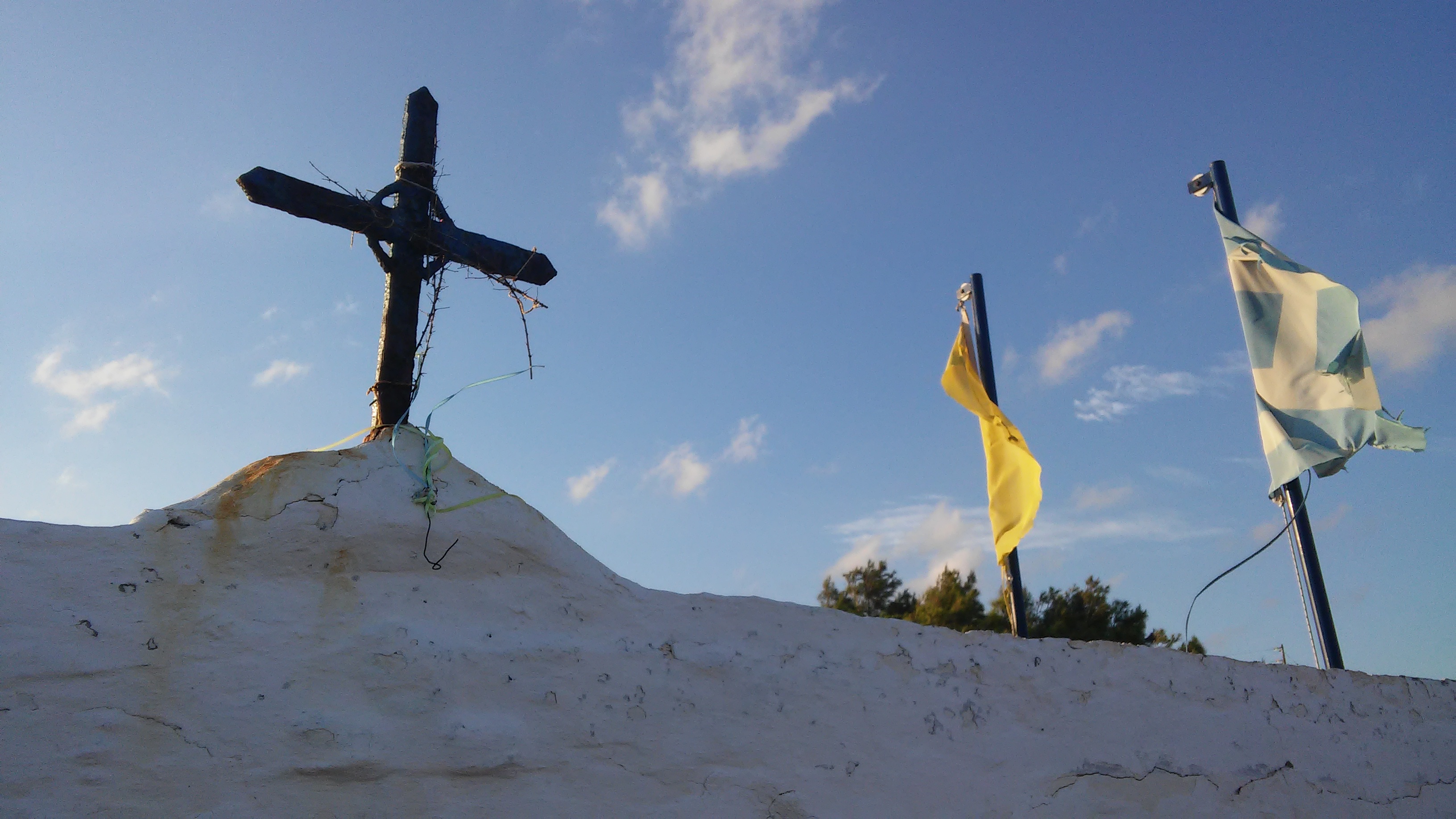 I’ve regularly visited Greece for vacations since Crimea is occupied. As I am a student having only a part-time job in Paris, I have to think carefully of how to spend my limited resources. My first apartment in Greece that I rented three years ago for only one month, July, 2015, had 2 bedrooms, a living room with a kitchen, a balcony with the view to the bay, bathroom & WC with everything you need there. The hosts, a Greek couple with a lot of children, asked 600 euros for this.

Next time I found a much bigger apartment for a much lower price which I will not tell you 🙂 There is no view but two floors and a tiny back yard. I come there back with my friend again and again. And we’re dreaming about staying there at least three months. Our maximum was 2.5… It’s never, never enough. The flat is not quiet, however: cats, dogs, roosters, cars and neighbours… But it’s so nostalgic.